Disney+ Hotstar is launching new plan at as low ₹49

Back in September, Disney+ Hotstar declared new plans including a mobile-only plan priced at Rs. 499 per year. This mobile-only plan offers video streaming up to 720p resolution. Now to gain new customers they are coming up with a new monthly plan. Presently the organization is trying a month-to-month plan offering similar advantages. This will offer the same services only a monthly recharge plan. The plan is initially planned at Rs. 49 every month. Afterward, the cost can go up to Rs. 99 every month. 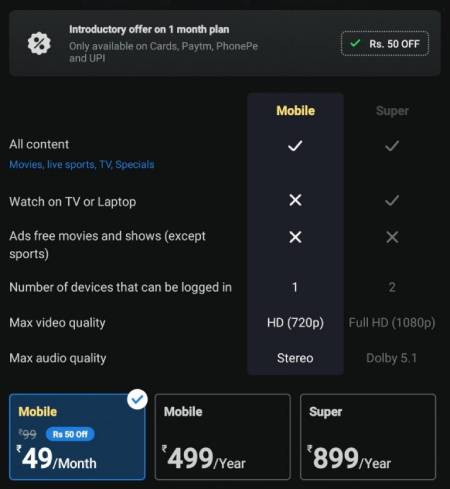 Since the yearly plan is already at ₹49 so it is least likely that the charges will shoot up to ₹99.

As the plan is still being tested, it is not available to all users. It’s unclear when the company plans to roll out this plan on a large scale to all users. Recently, Netflix also unveiled new pricing for all of its plans. Now the SD-only mobile plan costs Rs. 149 per month. Perhaps this is one reason why Disney + Hotstar is now testing the monthly price of its mobile-only plan.