How to enable WhatsApp disappearing messages feature on Android, iOS, KaiOS and Desktop

Whatsapp disappearing messages is available on the latest WhatsApp version: Here is how to enable this disappearing feature on Android or iOS.

Do note that your messages will still be visible if messages were forwarded or screenshots of messages taken.


By default, the media you receive in WhatsApp will be automatically downloaded to your photos. If disappearing messages are turned on, media sent in the chat will disappear but will be saved on the phone if auto-download is on. So this feature is imperfect compared to the same feature in Telegram.

How to enable WhatsApp Disappearing Messages 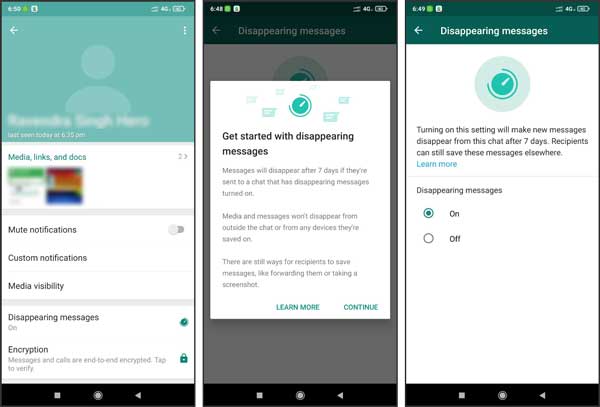 Step 1: Open WhatsApp on your Android phone and visit the profile of the person you want to turn on the feature.

Step 2: Scroll down a bit and tap on Disappearing messages. In case you can’t find the feature in the app, then you need to check in Google Play Store if there is an update.

Step 3: Press Continue after reading the instructions. WhatsApp gives you a brief of how this feature works, and you can get more details by tapping on Learn more. Once you are aware of everything, you can select “On” to enable the Disappearing messages feature. You can follow the same process to disable it.

Step 1: Open the WhatsApp chat on iOS and visit the profile of the person you want to turn on the feature.

Step 4: If prompted, press Next > OK. You then need to select On and then press on OK.

An important thing to note here is that once the Disappearing Messages feature is on, there, however, is no option of customizing the time frame after which the messages will be deleted. Well in the future we can expect this feature.