A new term web3 is a new buzzword that tech, crypto, and venture capital all talking about. Let me first clarify that doesn’t go into FOMO about this new terminology web3 or web 3.0. Web3 is a new age internet technology which is not coming in at least 4-5 years. The recent buzz is a result of big tech giant CEOs Elon Musk(Tesla) & Jack Dorosy(former Twitter) are tweeting something that is related to web3.

Has anyone seen web3? I can’t find it.

Web3 is an umbrella term for all decentralized web and applications on the Internet. So this technology points out in the direction of eliminating the big middlemen on the internet. In this new era, navigating the web no longer means logging onto the likes of Facebook, Google, or Twitter. This third-generation actually allows you to interact and communicate in your own way without being controlled by any central body. To understand this technology we have to first understand the evolution of the Internet.

The evolution of the Web

The internet, as we know it, has evolved over the decades through various technologies and formats. Tim Berners-Lee in Switzerland started the first webpage back in the 90s and since then Internet has evolved and spread its claws in different dimensions. So this evolution has been divided into 3 stages.

Web 1.0 introduced information and data in a static manner, being described by low user interaction. For instance: leaving comments, manipulating or creating content of a website. This technology is still widely used today to display static contents such as manuals, terms & conditions pages.

Web 1.0 had very few content creators and mostly the developers created content on the web. Since the creators were very few this model was basically information for many, Likewise, the broadcasting model is widely used in the media industry by TV, radio, newspapers, and magazines.

Web2 refers to the version of the internet most of us know today. It is the second stage of the evolution of the web, also called the read-write web which came into existence almost a decade after web1. This era of the internet is basically driven by user Interaction such as Facebook, Instagram, YouTube, etc.  These companies allowed users to create their own profiles, share files and interact with each other on a larger scale. Wikipedia serves as one of the best examples which enabled the net community to develop the most comprehensive encyclopedia ever created. 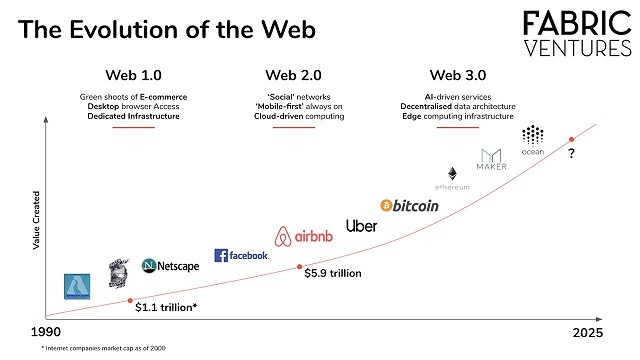 In this era of web 2.0 tech developers have taken back seats and more users created content has taken over the Internet. Anyone can create an article through WordPress, create video and share on YouTube, Instagram, Facebook, anyone can share their opinions and get other users’ points of view from all over the world.

Thus, Web 2.0 brought a fundamental shift where people are allowed to share their perspectives, opinions, thoughts, and experiences via a number of online tools and platforms. Web 2.0 is built around the users, producers just need to build a way to enable and engage them.

Also read: Want to Invest in Crypto? Here are the Top 5 Best Crypto Exchange in India

Web 3.0 is the next generation of web, also termed as the executable web or read- write-execute web. It has also been referred to by another term as Semantic Web to describe a web in which machines with the help of AI & machine learning would process content in a humanlike way.

Currently, all data are owned by big tech giants like Google, Facebook, etc which can influence your behavior according to their preference. Now in this new concept, everything is supposed to be decentralized which will work on blockchain technology(a term popularized by crypto). Which helps to intelligently generate and distribute useful content tailored to a particular need of a user.

We have slowly advanced into web 3.0 ad some of the real-life examples are  Apple’s Siri, Google’s Cloud API, Wolfram Alpha, Google assistant, Alexa.

A web dominated by organizations that offer types of assistance in return for your own data. Web3, with regards to Ethereum, refers to decentralized applications that can run on blockchain technology. These are applications that permit anybody to use their own information. 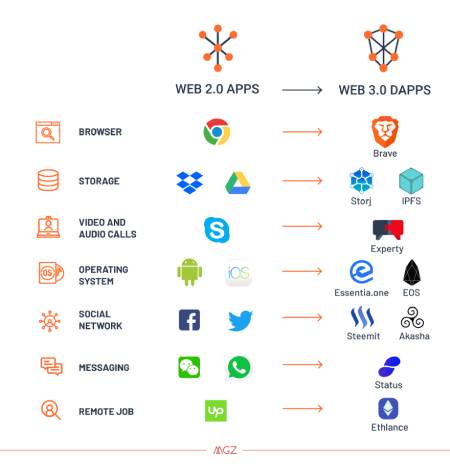 Many Web3 developers have chosen to build dapps because of Ethereum’s inherent decentralization:

Also read: Windows 10 keyboard shortcut you Must Use in 2020

These all are illustrative examples to show that how web3 will be different from web2. This doesn’t mean that all apps will be converted to dapps.

Web3 has currently has some kind of limitations right now

Well, this is all speculation and things might go in this direction. But there is nothing that is completely decentralized or completely centralized.

Well, that’s all for this article. The internet has radically altered the world we live in today and the ability to be more productive and stay in touch with others through various means is just the tip of the iceberg. Let’s see what more Web 3.0 has more to offer for us in the coming future. But remember one thing,

You affect the world by what you browse.

so, the internet which you want to leave for future generation is solely your responsibility. Do let me know if this was insightful or even slightly helpful, any feedback is welcome. Want to connect with me, find me here: